Chromebook or tablet: which one to choose?

If you’re hesitating between buying a Chromebook or tablet, it’s good to compare the differences and similarities. Both devices have some similarities, but there are some differences that can be an overriding factor.

Of course, nowadays you can manage and see a lot on your smartphone. And in many cases, an Android tablet or iPad could be the perfect solution. Especially if you watch a lot of content, for example. More and more often, a tablet is also used as a business tool or something you work on while on the move.

But wouldn’t it be better to choose a Chromebook? A Chromebook has a built-in keyboard and can also be used as a tablet if it has a touchscreen. In addition, both Chromebooks and Android tablets have the Google Play Store, so you can use a wide range of apps, games and services. On the iPad, you use the App Store to download apps and the like. The offerings are not quite the same, but for the most part, they are.

But which hardware do you choose when you just want a big screen to watch content on Android? The shape of the device plays an important role, but there are also other things to consider.

Choosing between a Chromebook or tablet 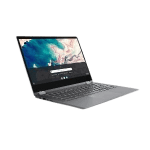 Everyday use: the possibilities

When you choose an Android tablet or iPad to work on, you have to connect a separate keyboard to it. Chromebooks in tablet form now come with such a separate keyboard, but chances are you’ll come across one that just has a fixed keyboard.

The keyboard is then attached to the screen by a hinge. And in many cases, the keyboard can be folded back completely, leaving you with a tablet with Chrome OS. It’s a bulky tablet, but that’s all.

The hinge allows the Chromebook to be positioned in multiple angles. There’s the tent position, where the device forms a triangle when placed on both edges. There is also the presentation mode. The screen folds upright, while the keyboard turns around and lets the device rest on its buttons. Don’t worry: the keyboard switches itself off automatically.

A Chromebook with a fixed keyboard provides several possibilities and is also flexible. But what happens if we compare it to an Android tablet or iPad? Well, such a tablet can often be placed in the same positions, but you have to be careful that the screen does not accidentally detach when you apply too much force.

The advantage of an Android tablet or iPad is that it is nice and thin, even when you enclose a detachable keyboard. The device is still thinner than a Chromebook with a fixed keyboard.

As an Android or iPad user, you can also choose a wireless Bluetooth keyboard. The thickness does not increase, but the convenience does. Although: you do have to constantly make sure that the keyboard is charged. You also have to take into account possible connection problems and the fact that the buttons do not function as well as on a full keyboard.

The big difference between the keyboard experiences is that a Chromebook’s keyboard is really part of the experience, while for an Android tablet or iPad it’s really an accessory. You notice this in the software as well: the Chrome OS is built for a keyboard, while Android and iOS are not.

Android vs Chrome OS vs iPadOS

Then you can consider whether you should choose Android, Chrome OS or iPadOS. The operating systems are all solid, but have the same drawbacks. On all systems, for example, certain apps can no longer work when the hardware or software is outdated.

With over a million apps in the Google Play Store and the App Store, it’s hard to escape that. The Google Play Store, by the way, is the download shop that you can access on both Android and Chrome OS. Therefore, both ecosystems have access to roughly the same applications and services. So that shouldn’t make a difference.

However, there are apps and services that do not work on Android but do work on Chrome OS. For example, certain school programmes work perfectly on a Chromebook, while Android tablets can’t do anything with them. It is also true that on Chrome OS you get access to the full desktop browser version of Google Chrome, while iPadOS and Android have to make do with a mobile version.

That Chrome OS version of Google Chrome is in fact the best there is, even when you compare it to the Windows and MacOS versions. Chrome on Chrome OS is incredibly fast and efficient and offers access to thousands of extensions that can expand its capabilities.

That version of Chrome is also safe to use. An Android or iPadOS application cannot request data from Chrome, such as passwords and credit card details. Android apps may run native on a Chromebook, but they actually run in a so-called container.

And because those apps run in a container, they have no access to other parts of the operating system. So if you accidentally download a rogue app on your Chromebook, for example, you’re better protected than on an Android tablet. For sure, that could have an impact whether to choose for a Chromebook or tablet!

What is it you are looking for?

Finally, if you’re hesitating between a Chromebook or tablet, there’s one question that matters: what are you looking for? Android tablets offer a working environment, and companies like Samsung try to make the most of it by offering a custom software environment – but it’s clear that Android wasn’t designed for this in the first place. It’s pretty much the same with iPadOS.

Apple has invested heavily in the ecosystem in recent years, but the tablet series is not designed for working on.

Read more: Best Chromebook to buy: here are your options

The Chrome OS, and the Chromebook in general, was created with this idea in mind. It’s not just in the software, but also in the fact that the keyboard is an integral part of the experience. And that really makes a difference here.

Tablet makers are still frantically trying to make something out of Android as a business partner, and Apple does offer a nice work environment (especially for people who have to illustrate or design for their jobs), but in many cases a Chromebook is better for education or work.

Best browser for Chromebook: all options at a glance

Roblox on Chromebook: how to play this popular game

Fortnite on Chromebook: how to play this game

We will be happy to hear your thoughts

Best browser for Chromebook: all options at a glance

Roblox on Chromebook: how to play this popular game

Fortnite on Chromebook: how to play this game